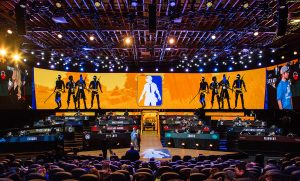 Opened in December 2018 in Manhattan Beach, California, the OGN Super Arena is the largest esports studio arena on the U.S. West Coast, and the first esports venue in North America designed specifically for popular “battle royale” esports games. These include games such as Fortnite, Call of Duty and PlayerUnknown’s Battlegrounds (PUBG), and can host up to 100 players and 500 audience members. The battle royale format refers to survival-oriented games that result in one sole surviving player.

OGN (www.ognesports.com) is a South Korean esports network and content producer that created the world’s first esports league in 2000. They are a division of CJ E&M, one of Asia’s largest entertainment companies. Since 2000, OGN has produced over 500 global esports leagues and events in over 150 countries. They produce over 3,000 hours per year of esports and gaming-related content, which generate about 200 million total live stream views annually. In October 2018, OGN announced an investment of $100 million in North America to produce live events and other esports content here.