Need a reliable broadcast? That’s what Comrex does.

When broadcasting live, engineers are under a lot of pressure. You only have one chance to get it right, and if any of your equipment isn’t working, it could ruin your programming for the day. And in many scenarios, codecs play the most important role in the broadcast. If your codec isn’t transmitting, you don’t have a program.

We believe that a great codec is one that you don’t have to think about. Comrex builds codecs that connect easily and deliver high-quality audio over IP networks with low delay. To make sure our codecs provide stable connections even under the worst conditions, we’ve developed some highly-specialized tools. These ensure that your broadcast stays solid, even if your networks don’t.

CrossLock is a suite of reliability tools – it’s the “special sauce” that makes Comrex codecs tick. 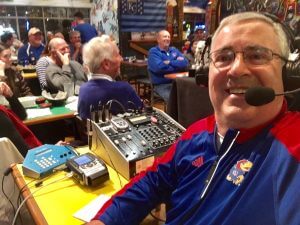 When audio is streamed over the internet, it is packetized into data, and the packets are sent to an IP address (that belongs to a computer, or a codec, or your smartphone, etc.). If you’ve got a solid, wired connection, the packets will arrive in the order they were sent and you’ll have a solid stream. But what if the connection isn’t very good? In that case, the packets might get scrambled, and some might not be sent at all. (This is why when you watch Netflix on a bad connection, you might see some glitches in the image.)

CrossLock creates a virtual private network (VPN) between your two boxes. A VPN is a network within the network you’re using. (To use a crude analogy, it’s sort of like a pipeline that runs through the ocean.)

The VPN layer uses its own IP addressing, routing rules, and protocols. Because CrossLock VPN has its own rules, it can decide when it would be an advantage to add resend-based error correction to the link (ARQ), as well as preventative error-correction (FEC). These decisions make Crosslock very effective at fixing “bad” networks, while stepping back from networks that are “beyond repair” and not making them more difficult to recover. In some modes, CrossLock can also signal encoders to “throttle down” their data rate to avoid congestion, reducing quality but maintaining reliability. CrossLock does this by building extra data streams between the codecs that relay important information (e.g. decoder statistics back to the encoder). 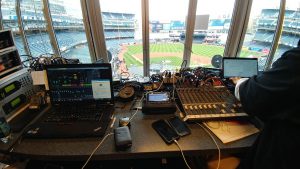 Comrex codecs can be connected to multiple networks at one time. Each network connection gets added to the CrossLock layer, doubling or tripling the available network bandwidth on that end of the link. This a very powerful tool to use when the network capacity is an unknow

Often, two different 4G carriers can insure something works well. But simply adding network capacity isn’t enough. CrossLock is smart enough to estimate each network’s upload performance, and apportion data appropriately. This is best illustrated using the statistics page of the codec’s user interface. Using color-coded graphs, you can see that CrossLock likes each of its networks equally, and has applied about half of the data load to each network.

“I’m at a loss as to what I should say,” said Frank Alwine of Vermont Public Radio in an interview with Comrex about the BRIC-Link codecs he uses for his station’s STL. “It’s kind of boring — our BRIC-Links simply work, and that’s pretty much all there is to it.”

“As I’m thinking about it, I realize that “boring” is the best endorsement I could give,” said Frank. “I don’t have to worry about these things — they just plain work all the time. Since we purchased them in 2010, not a single unit has failed. That means 24/7, every single day, for the past seven years, these units have just been working. From a broadcast engineer’s standpoint, you can’t get much better than that.”