This piece was originally published in TVTechnology. To read the piece, click here.

IRVING, TEXAS—As senior vice president of studio operations for TheBlaze—a media network founded by Glenn Beck—for the past several years, I’ve been responsible for managing the backend for all programming at TheBlaze television, as well as the production side for TheBlaze radio network.

Throughout my 30-plus years in broadcasting, Comrex has been with me for the entire journey—from single line frequency extenders on POTS lines to IP codecs. Radio made up the majority of my career, but in the last several years I’ve begun handling television as well.

We use Comrex’s LiveShot to provide bidirectional video transmission over the public internet, employing multiple LiveShot units in our Blaze Media offices. LiveShot makes it possible to link studios and connect with interview guests in New York or D.C., without using services that require a monthly subscription.

We also use LiveShot for remote broadcasting, enabling us to bring Beck’s show to his viewers when he is on the road. 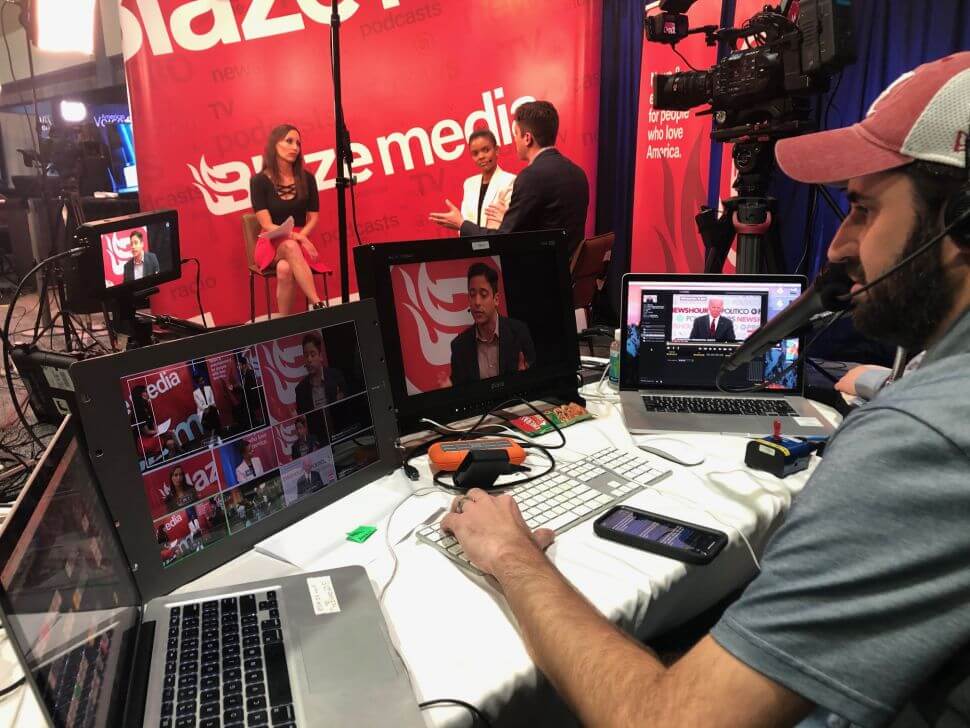 CrossLock assists TheBlaze crew with network management when they are in the field.

The secret behind the Comrex family of IP codecs is CrossLock, a network management tool that can connect with multiple networks at once, intelligently monitoring network strength and dynamically adjusting how much data is being placed on each network. It means our connections are more reliable, and we don’t have to worry as much about using public internet or 4G services. Being able to just plug into the public internet without needing to get a pri vate IP address is crucial to success.

I first used CrossLock with Comrex’s IP audio codecs, and was intrigued when I learned that it’s a core feature of their IP video codec as well. It makes network management in the field much easier, which is especially crucial because we do bidirectional video and audio. I’ve found that LiveShot provides low-latency video and high-quality audio, even when we’re sending a lot of data.

One of my favorite features of Live-Shot is the ability to monitor connections remotely. We rarely send the unit out with nontechnical users, but if there’s a problem, it’s easy to log into the user interface, see the connection and modify as needed. One time, when using Live-Shot with Beck, we discovered that the 100 MB internet path we were provided was not configured as we needed and was barely delivering 5-10 MB. Our IT professional, who was in another city, was able to monitor and modify the connection as we were doing the show so that we had no drops until the line was reconfigured correctly.

As someone who is familiar with Comrex audio products, I was excited to see that LiveShot operates in the same way. The interfaces are similar, and the concept of bonded IP networks is the same across products—it’s only different because it’s video. These similarities gave me a level of confidence because Comrex audio products are so solid. The error correction, robustness, and packaging are what I’ve come to expect from Comrex products.

Furthermore, tech support has always been great—I’ve never had to sit on the phone for an hour, and I’ve never gotten a half-hearted answer to a technical question. The tech support team is well informed and often knows how to solve a problem immediately. In the late ‘80s, I even was walked through a problem over the phone late one night by then president John Cheney.

Since the days of John Cheney, Comrex has been putting out solid products. That continues today and through that I feel like they have earned the trust of people like me.

Rob Chickering is senior vice president of studio operations for Blaze Media. He can be contacted through theblaze.com/contact.