TheBlaze (now part of Blaze Media) is a media network founded by Glenn Beck. For several years, I’ve served as Senior Vice President of Studio Operations. Essentially, my role encompasses the production back-end for all of Glenn Beck’s programming at TheBlaze television, as well as the production side for TheBlaze radio network. IT and general studio engineering also fall under the big umbrella of “studio operations”, so I handle a lot of that too. Comrex ACCESS and BRIC-Link IP audio codecs have been the lifeblood of TheBlaze radio for years. 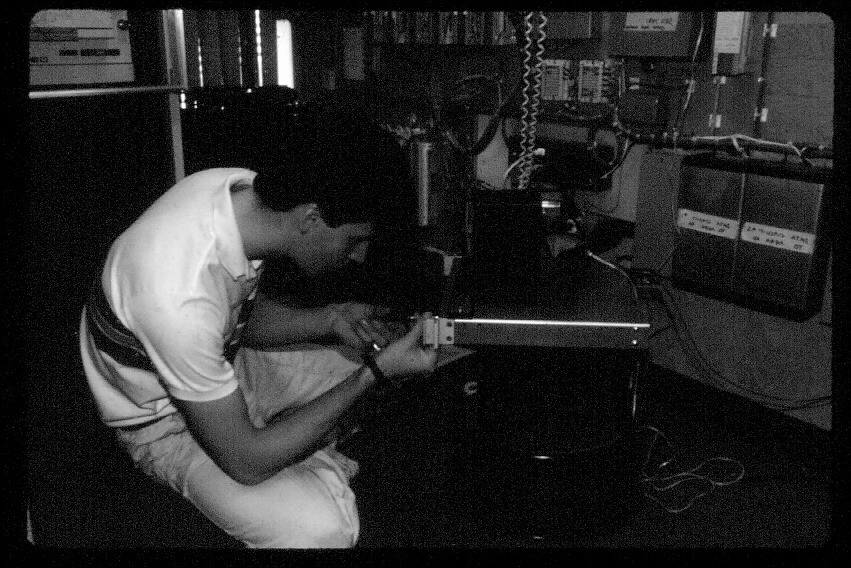 Rob Chickering, working with Comrex equipment at the beginning of his career.

I celebrated 30 years in radio broadcasting a few years ago, and I’ve been using Comrex equipment since I began. Several decades ago, while struggling to set up a Comrex THX, I called Comrex late at night. A nice guy named John answered the phone and walked me through what I should do to fix it. The next day, when I told my boss, he said “Wait – do you mean John Cheney? He owns the company!” The president of Comrex was willing to take my call and patiently answer my questions, even though it was after hours.

That’s a story I love, and it sums up why I’ve continued working with Comrex for over 30 years.  Tech support has always been really terrific. I’ve never had to sit on the phone for an hour, and I’ve never gotten a half-hearted answer to a technical question. The tech support team is well-informed and often knows how to solve a problem immediately.

Comrex ACCESS NX portable is built perfectly for the field. It’s also always ready to go out into the field. I’ve never had an experience where it hasn’t worked when I needed it. The ergonomics are carefully considered, and it’s built tough – which is perfect for remotes.

ACCESS NX is especially easy to use because of CrossLock. CrossLock is a network management tool that allows us to use multiple networks at once, and it intelligently monitors network strength and dynamically adjusts how much data is being placed on each network. It means our connections are more reliable, and we don’t have to worry as much about using public internet or 4G service. Being able to just plug into the public internet, without needing to get a private IP address, is so convenient.

Additionally, ACCESS NX is very user-friendly. For my users in the field, if I configure the unit ahead of time, there aren’t a lot of buttons for them to mess up. It’s easy to set up many of the basic settings that a non-technical user might need. And then for a technical user, there are so many features and ways to optimize your connections.

When I have Comrex units in the field, I spend very little of my time addressing issues or concerns. When hosts call in with a problem, I can use the browser-based user interface to check settings and monitor stats remotely. Being able to see what’s happening with the connection makes it easy for me to diagnose problems and find solutions.

In general, Comrex has a history of putting out solid products. I feel like the company has earned the respect and trust of people like me, and as long as that trust is preserved I’ll continue to use Comrex gear.